Andrea is a young MA graduate from the University of Tartu with a strong interest in North and Eastern European affairs. He has a background in linguistic and he loves applying his analytical skills in political discourses. He is also a Federalist and European enthusiast due to his multiple experiences worldwide, allowing him to realise the beauty of the cultures. View all posts by Andrea Salvadori 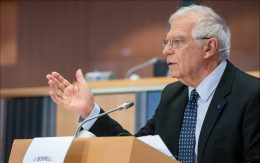 Josep Borell, the High Representative of the Union for Foreign Affairs and Security Policies (HR), concluded his visit to Russia on 6th February 2021. During his visit, the HR met the Russian Foreign Affairs Minister, Sergej Lavrov, to discuss the future EU-Russia relationship. This opinion discusses the outcome of the visit and offers a perspective for the EU-Russia relationship in the near future.

Estonia is the first country in the world that appointed a female president and a female prime minister. Since the previous PM Juri Ratas from the Centre Party (Eesti Keskerakond) resigned after a corruption scandal, Estonian President Kersti Kaljulaid (Independent) appointed Kaja Kallas from the Reform party (Reformierakond) as the first female to be PM in Estonia. So, what can we expect from the new coalition government that was formed in January?
Found 2 Results  |   Page 1 of 1